Trading on financial markets is associated with a high level of risk and can lead to a loss of money deposited.Investors residing in Spain are warned that the Spanish Securities and Exchange Commission (CNMV) has determined that, due to their complexity and the risk involved, the purchase of FX products by retail investors is not appropriate/suitable.


EUR/USD: First Down, Then Up 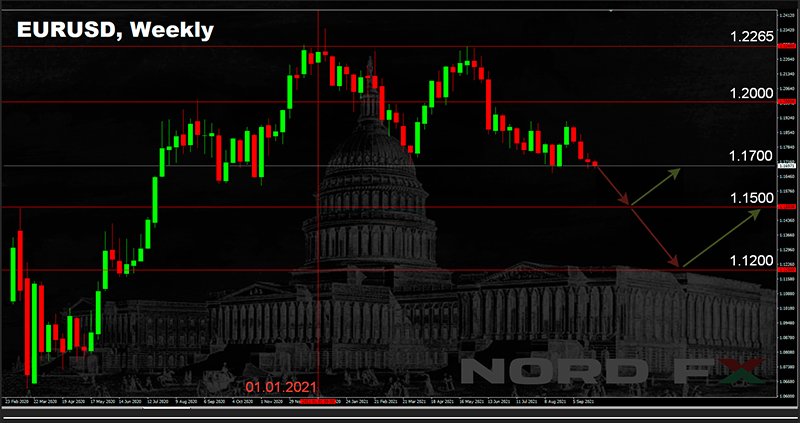 The global economy is recovering from the effects of the COVID-19 pandemic, and this process will continue in 2022. At least. The forecast for global GDP growth of 6% is maintained this year. Growth will continue (unless there are new “surprises”) to roughly 5% next year, according to preliminary forecasts. However, this is an average indicator, and it is the difference in the rates of recovery of the economies of different countries that will affect the rates of their national currencies.

You can see quite different vector behavior of the EUR/USD pair since the beginning of the pandemic. Having started at 1.0635 in March 2020, the pair was already at 1.2350 in early January 2021. The weakening of the dollar has been affected by the intense pumping of the US economy with a huge dollar mass as part of the monetary stimulus (QE) policy implemented by the US Federal Reserve.

With the start of a new 2021 and the arrival of the administration of a new President Joe Biden in the White House, the market has a feeling of greater stability and the imminent winding down of QE. All the more so because macroeconomic indicators, particularly inflation and the labor market recovery, were encouraging. The dollar gained muscle and the EUR/USD pair dropped to 1.1700 by the end of March.

But dovish sentiment prevailed among the Fed's leadership, the pumping of the economy with money continued, the beginning of the curtailment of the quantitative easing program was postponed indefinitely, and one could not even think about raising the base interest rate. And the pair rose above the important psychological level 1.2000 again, reaching the height of 1.2265.

The competition between the central banks of Europe and the United States certainly did not end there. But while the ECB's rhetoric continued to be dovish, the statements of some Fed leaders already sounded a harsh hawkish note. Investors started to expect that the Fed would begin to roll back QE at the end of this year and will complete it in 2022, in order to start raising the discount rate in early 2023. And the dollar gained ground again, dropping the pair back into the 1.1700 zone.

At its September meeting, the American regulator did not announce any specific plans regarding the curtailment of the monetary stimulus program. But, if decision-making dynamics remain the same, the Fed will be ahead of the ECB by about six months.

As for the second half of 2022, according to a number of forecasts, the US economic situation will stabilize, while the “slow” Eurozone, on the contrary, will begin to gain momentum. A reduction in the European QE program and a rise in the euro interest rate could reverse the trend and return the pair to the 1.1700-1.2000 zone.

It is clear that the dynamics of the pair depends on many factors on both sides of the Atlantic Ocean: political, economic, and in recent years, epidemiological. One other major player is China, which also has a strong influence on the economies of both the Old World and the New World. Therefore, it should be understood that everything said is based on a vision of the situation at the moment, and can be (and should be) subject to adjustment many times over the coming months.

« Market Analysis and News
Receive
Training
New to the market? Make use of the section with educational materials. Start Training
Questions and Answers
This is a section where you will find not only answers to your questions but also a lot of other useful information
Learn More

Risk Warning: CFDs are complex instruments and come with a high risk of losing your invested capital rapidly due to leverage. 66.67% of retail investor accounts lose money when trading CFDs with this provider. You should consider whether you understand how CFDs work and whether you can afford to take the risk of losing your invested capital. If you do not fully understand the risks involved, please seek independent advice. For a better understanding of complex financial products please click here.

NFX Capital CY LTD does not provide financial services to the residents of USA, Canada, Japan, Belgium and other additional jurisdictions.